… in which we tackle the Géant de Provence

After an aperitif by the small pool of this excellent and incredibly scenic chambre d’hôte we joined the friendly and engaging Dutch couple (Dennis and Sabrina) for a fine home-cooked meal and some local wine straight from the barrel. Jonathan’s illness seemed to be receding, and we listened with great interest to the account of Dennis, who had ascended Mont Ventoux on his solo bike that day. If anything his helpful advice gave us more confidence, and after a convivial meal we retired early, as we had booked breakfast for 7.30am.
All traces of illness had disappeared by the time the alarm clock woke us up this morning. We ate our breakfast in an atmosphere of quiet nervousness,, struggling to eat enough to provide fuel for the day. 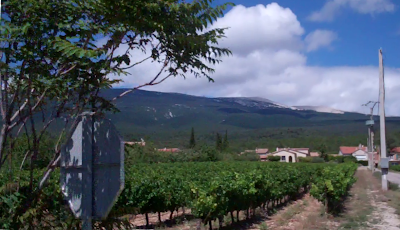 Saddling up, we rode off down the slightly gravelly track to Bédoin, through fields of olive trees and prickly pears. A few nervous-looking riders were flexing their muscles in the village main square, and trying not to look at the looming bulk of Mont Ventoux behind them.

It is a singular mountain. The lower and middle slopes are covered in rather stunted-looking pines, victims of the seasonal Mistral wind. These give way on the upper slopes to an almost lunar landscape of shattered rock, the whole topped with an ugly meteorological station. Its fame derives not from any physical beauty, but rather from the iconic position it claims in the history of the Tour de France. From a British perspective it is perhaps best known for the demise of the cyclist Tom Simpson who, suffering from ill-health and fuelled by a combination of brandy and amphetamines, collapsed some 800 metres from the summit. Urging spectators to “put me back on my bike”, he wobbled a few more yards before collapsing again, never to recover. 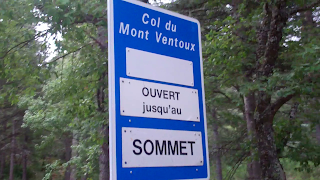 We decided to skip the brandy and amphetamines. The road from Bédoin rose gently at first, at a gradient of about three percent, providing a welcome warm-up for the muscles. The day was growing warmer, but we could see signs of the Mistral above, as the clouds were scudding quickly across the sky. After about three miles the climb kicked up in gradient to seven, then nine or ten percent. We have tackled much steeper climbs at home, but they were much shorter and usually shelved. This climb though was relentless, twisting through the forest. Frequently we were overtaken by riders on solo bikes (one cannot climb as quickly on a tandem). Some offered encouragement, some expressed doubt as to our sanity, some engaged us in conversation. A few passed without a word, listening to their iPods or perhaps preferring to concentrate on their objective. One or two dismounted from time to time and walked, but we stayed in our saddles and climbed steadily on, stopping occasionally to have a drink or eat an oat bar. 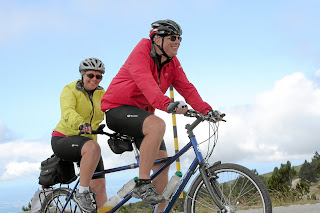 Our first target was Châlet Reynard, six kilometres from the summit. Before reaching there we had to tackle the crux of the climb, where the gradient rose yet further for three kilometres. We’d decided to take a break at the châlet, and it was with some relief that we emerged from the forest and spotted it ahead. The strength of the wind became apparent as we left the shelter of the trees and headed inside for a coffee. It was very much like entering an on-piste ski restaurant, with the same smell of coffee and relative warmth. 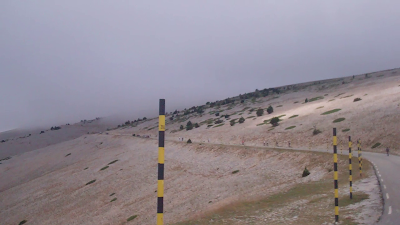 After our short break we remounted and set off into the shattered landscape. Only six further kilometres to go! The gradient had eased somewhat, and the first two kilometres passed really quickly. As we climbed ramp after ramp though, the wind grew dramatically in strength, and it was difficult keeping the tandem going in a straight line. We had donned arm-warmers and rain jackets when we stopped, and it had proved to be a good move – the wind was bitterly cold, and gusting at fifty-five kilometres per hour. So our main struggle now was not the gradient, but the wind. Again, we saw several riders choose to push their bikes through the windier sections. At the Col des Tempêtes a particularly violent cross-wind blew us halfway across the road. The visibility was poor now too, we had lost the spectacular view across Provence.

The last two kilometres were painful, because of the wind. We stopped briefly at the Tom Simpson memorial near the summit. Here it is traditional for British riders to leave a token cycling-related item. We still had our broken spoke from yesterday, so Clare placed it on the memorial among the other bicycle parts, bidons and flags.

A few minutes later we turned the final steep corner, joining tens of other cyclist at the 1912 metre summit. We were grinning from ear to ear, very happy indeed to reach the top! It was busy up there, and extremely cold, so after taking some video we turned around and descended a short distance to the mountain restaurant. Here we refuelled for an hour or so. Briefly the clouds cleared, providing a great view down to Bédoin below. 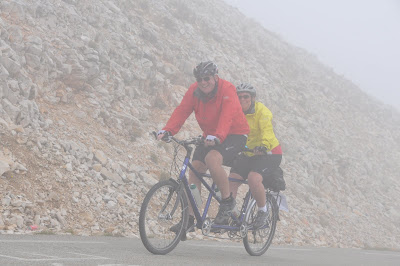 We had slightly dreaded the first part of the descent because of the crosswind, but we arrived back at Châlet Reynard quickly and safely. Here Jonathan made the mistake of testing the temperature of the brake disc with his finger. The finger quickly blistered! We had another drink in the café while everything cooled down, before re-entering the forest. The descent was steep for some kilometres, and we stopped periodically to let the brakes cool. Eventually we reached the shallower gradient of the lower slopes,  where we could let the tandem run without braking. In what seemed to be a very short time we arrived back in Bédoin, where, after doing a small amount of shopping, we climbed back to the chambre d’hote. A quick swim in the pool helped to ease the muscles.

So we are two very happy tandemists this evening – there’s little climbing now until the Spanish border, and the south coast of France is beckoning. Tomorrow we’re heading for Remoulins, close to the Pont du Gard. Better still, it will begin with a long downhill section!